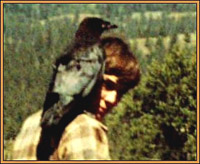 My name is Mary Anne and I'm a multi-media, freelance artist, living in the countryside near Ellensburg, Washington. My preoccupation with art began in toddlerhood and simply never let up. I won my first public art award at five years old: A red Popsicle and a certificate. The picture was of an American Robin.

While growing up as a "construction brat," I lived in all of the Western United States, including Alaska, and attended more than 30 schools before graduating from high school. My childhood was a blur out the car window, but art remained a constant in that ever changing environment. Later I received formal art training in commercial art and painting. I earned a university degree, with experience in stone lithography, etching and silkscreen (plus loads of art history). That was postponed, however, until I'd finished raising my four beautiful, talented children.

I'm a devout animal lover and sometimes militant demonstrator on their behalf. They inhabit my artwork as well as my daily life. My studio, White Raven Enterprises, grew out of that strong connection and from having hand-raised a squawky baby raven that I named "Nevermore" and for whom I later created a special memorial lithograph. That lithograph in turn became my logo.

My artwork is included in public and private collections across North America, South America, Japan and the United Kingdom. It appears in juried art exhibits as far away as Paris and Bordeaux.